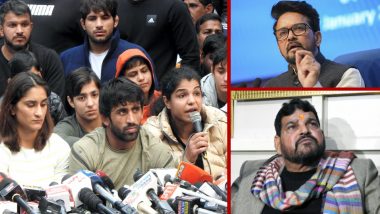 Sports Minister Anurag Thakur came to Delhi tonight and talked to the players. It is being told that he had called all the wrestlers for dinner at 10 pm. Talking to the media, the Sports Minister said that the allegations of the players are serious. They will be investigated.

If sources are to be believed, Brij Bhushan Singh has refused to resign at the moment. According to sources, on behalf of the Sports Ministry, Brij Bhushan Singh has been asked to resign from the post of federation president in 1 day. It is being told that instructions have been given to them by calling from the ministry. It has also been said that if he does not do so, he will be removed. The players who met the Sports Minister include Bajrang Punia, Vinesh Phogat, Sakshi Malik, Babita Phogat, Satyavrat and Anshu Malik.

Indian Olympic Association President PT Usha said in the matter that I am discussing the current issue of wrestlers with the members and for all of us the welfare and well-being of the athletes is the topmost priority of the IOA.