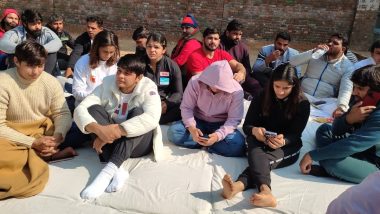 New Delhi: Indian wrestling wrestlers are in headlines these days. About 30 wrestlers, including Vinesh Phogat, Bajrang Punia, Sakshi Malik, continue to protest against Indian Wrestling Association President Brij Bhushan Sharan Singh. Wrestlers have made allegations of sexual exploitation against union president Brij Bhushan Sharan Singh and several coaches. Seeing the growing controversy, Sports Minister Anurag Thakur met the wrestlers regarding this matter. The eyes of the whole country were on this meeting, but this meeting remained inconclusive. Wrestlers Protest: Why are the wrestlers who won medals for the country sitting on the dharna? Question on Wrestling Federation, long list of allegations against President Brij Bhushan Singh.

Protesting wrestlers including Vinesh Phogat, Bajrang Punia, Sakshi Malik, Anshu Malik, Ravi Dahiya, Sarita Mor met Thakur at his residence on Thursday night and demanded immediate action. The meeting between the two sides continued till late night in which both the sides have so far failed to find any concrete solution.

According to sources, the government wants the wrestlers to end their protest but the players are adamant that the WFI should be dissolved first. A source close to the wrestlers told PTI, “The government can sort out other issues later, but it should first dissolve the WFI.”

Amidst the allegations, Wrestling Federation President Brij Bhushan Sharan Singh has called a press conference on Friday (January 20) at 12 noon. Brij Bhushan Sharan Singh will talk about the allegations against him in this meeting. It has been told from his office that all the friends of the media are invited to ‘expose the political conspiracy of conspiring against wrestling and wrestling and playing with the honor of women wrestlers’.