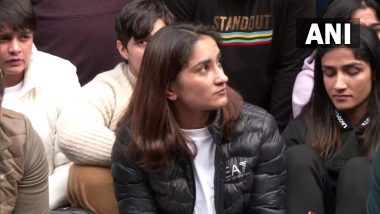 Wrestlers Stage Protest: Veteran players are sitting on a dharna at Jantar Mantar against the Wrestling Federation of India. These wrestlers include many players including Olympians Bajrang Punia, Sakshi Malik, Vinesh Phogat and Sarita Mor. Shraddha Murder Case: Shraddha Walkar’s father demands action against the policemen who did not act

Female wrestler Vinesh Phogat has made serious allegations against the coach. He said that “Coaches are harassing women and some of the federation’s favorite coaches misbehave with women coaches as well. They sexually harass girls. WFI president sexually harassed many girls.”

Vinesh Phogat said “They (the union) interfere in our personal lives and harass us. They are exploiting us. We didn’t have a physio or a coach when we went to the Olympics. Jantar Mantar wrestlers Have to say that ever since we have raised our voice, we are being threatened.”

They (federation) interfere in our personal lives as well and bother us. They are exploiting us. When we went to Olympics, we didn’t have physio or a coach. Since we’ve raised our voices, we are being threatened, say wrestlers at Jantar Mantar pic.twitter.com/980MkmIvhp

Vinesh Phogat said, “It is our compulsion that we have to come here and stage a sit-in. We had discussed among ourselves, only after that we decided about it, this plan was made when we were saddened by it. All the wrestlers Yes, everyone is having problems.”

Indian Wrestling Federation officials are reaching Jantar Mantar to meet the players sitting on dharna. Bajrang Punia said that we will not move from here until justice is done. When he was asked with whom he had problems, he said that the Federation creates problems for us.